EASTCOAST ProDOMME : There's no escape when you worship me in this adorable black and white latex outfit. I dont need to keep reminding you but I just enjoy saying it anyway. "There's no escape from me boy!"

I had an interview for the job promotion a few weeks ago and I didn't get it. That's okay. I understand you have to give it to the most qualified person, but I've been here a long time and I was really disappointed I didn't get it. I've heard that you can create a job for someone who is deserving of a promotion, and that's what I want to talk to you about. I thought I could prove to you how much I really, really wanted a promotion. I don't want you thinking I'm promiscuous, but... I want you to know that I'll do absolutely anything to get a promotion... including letting you put me in handcuffs until you think I'm deserving of the promotion.

EASTCOAST ProDOMME : Get a close-up at my money green lipstick. It reminds me of taking all your cash ha ha. You wont escape me in my black gothic latex mood

Look at these high heels. 14 cm! With plateau! What a dream! And I wear these high heels to have a very nice shit for you! And as you can see I'm also about to till my big scat box. It is the penultimate time 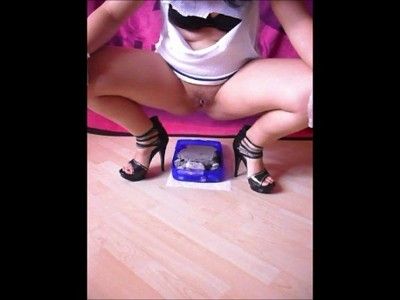 I chained my slave to my bed, ready to do as I please! First I apply some nipple clamps and start poking him with a pinwheel. Then I tie off his penis and balls and start scratching his disgustingly fat belly decorating it with beautiful red streaks. The wimp whines way too much so I decide to sit on his face and continue scratching him while he struggles to breathe. There is nothing I love more than seeing a slave wiggle around like a worm so I get off him and start scratching him more intensely while he's trying to get away, lol. Good thing he's restrained by chains!

Virgin Loser Joschi must be miserable manner kneeling wank his mini penis before his reign. The absolute ridicule given the figure of fun in front of the two has to jerk off his nonexistent tail. Bathed in sweat with shame and excitement jerks the Virgin Loser without it some brings a result. This amuses the Humiliator Prince and Goddess Gloria of course really. They mock him, imitate his movements weighting based on their little fingers, humiliate and verbally abuse him not to go.

This is something you would really love! We pee on pete for 5 times... My beautiful friend Dominique Plastique and me - we are so full of pee, that he loves to enjoy this shower very much! In the forest and on some other places... 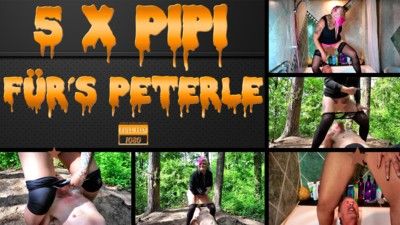 I see how you stare at my legs when I'm in the office. I know you like it when I wear my shiny tights. I can tell you wonder if I'm wearing panties under my tights. It must leave you frustrated when you go home. You're in for a very special surprise today! Yes, I'm going to let you see all the way up my tights and let you have the release you need. But after today, you'll never be able to look at me in the same way. I'll know what you've done.

EASTCOAST ProDOMME : You'll never be able to stop this addiction as you beg me to increase it deeper and further. You are going into cc debt, yet can't stop paying . At this point it is impossible for you not to obey me

ENGLISH SPEAKINGCUSTOM REQUEST - This is the second time you wrestle with your bro. Once again he borrowed money and didn't pay you back. You are going to fight him to make him understand how pathetic he is. He thinks he can keep your money, however you are going teach him a good lesson. Wrestling him to the floor, you sit on his chest and dominate him making sure he can't move. As he struggles, you continue to make him suffer by keeping his head between your powerful thighs as you press down on his throat. There's no escape, and he knows your too strong for him. With your foot on his neck, you tell him he's got five minutes to get your money as you enjoy you silky payback...

EASTCOAST ProDOMME : You will know why I am in such a good mood as my seductive evil and irresistible laugh makes you fall in deep to my scandalous ways

A custom request I did for a client. POV video of me chewing up and spitting out a bar of chocolate. Listen to the sound of me masticating and my chocolatey spit slowly dripping into your mouth.

My slave girl wanted to confess something to me - that she loves my feet ... well, I guessed that already. I order her to take off my converse sneakers, but she is not allowed to worship my feet just yet. She's allowed to smell them for a short time - and then kiss them a few times. But I want her to beg me, to beg to be allowed to lick my sweaty stinky feet! It's too funny to see this little bitch beg me to be allowed to lick my feet - and of course, after the begging, I'll allow her to lick all the dirt and sweat from my bare feet! This is a non-exclusive custom clip for a fan. If you want me to do a custom clip for you, send me an email to marissa@madamemarissa.com!

Down,LOSER and eat from my feet! It's a such big privilege for you to eat from Goddess' feet!You crave to be my private pet and it's what you deserve flithy PET!

The Humiliator whistles Joschi to him and tells him to bring the princess to him. Joschi then crawls to his queen Daisy and leads them on his back as a horse to the master. Once there, rising from Queen Daisy and sits down next to her lover on the couch. She opens his pants and starts to blow him before the eyes of a Joschi.

Slava dominates her slave with her ass. She use Alex's face a s chair and sits on him. Slava loves to use her slave as a furniture, especially when miserable slave can't breathe and cry for a small bit of air. Slava also steps on the Alex's hand with her wedge shoe to cause him an extra pain.

EASTCOAST ProDOMME : I am standing on top of you so powerful as I am always in control. You are beneath my magical big black cock wand.