"Stop whining little bitch!" - I'm in control now and revenge is sweet! This bitch is not going to breathe again without smelling my foot scent - my feet will suffocate her. I press my sexy feet on the slave girl's face until she can't take it anymore!

The foxes are tricky and smart creatures. The girls are like the foxes. They use you for their pleasures and they take a last penny from you. We have three foxy ladies: Teodora, Joss and Maya. Fight for a breath. The foxes smother him.

Come here toilet slave, I know you love eating my shit. You love when I let you place your head under my ass. This time I donât have a big, juicy load of shit for you. I have an ass full of dirty, disgusting enema water! I hope youâre thirsty! Because you are going to drink it all!Watch as I fill my ass up with some warm clean water. It wonât stay clean for long! My ass is so dirty and gross! There is some much poop sticking to the walls of my shithole! Iâm cleaning it all out for you! And youâre going to drink every last drop of this nasty brown water!Itâs time, toilet slave, itâs time for me to push out all of this water! Itâs going down your throat! Get your head under my ass and open your fucking mouth! Itâs time to feed you!Enjoy!

43633 - Two ladies and their covered caviar-pigs

Rieke and extremely Annika Bond drive it again perverse. Two submissive slaves to be covered and fed with caviar. Of course the two ladies from their covered servants are not dismissed until the garden has been completely cleared of waste! 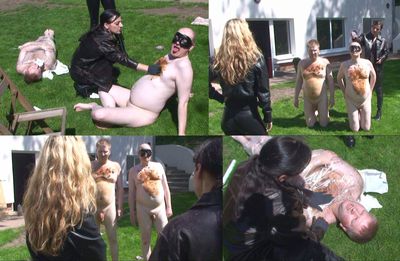 The slave's lying in the middle of the room and I put a little stool on his stomach - so I can sit on him comfortably! I'm texting with a friend and use the slave's mouth as my spittoon in between. I also take some photos of the slave with the funnel in his mouth for my friend - and try to take a selfie with him while spitting into his mouth :-D My friend can't believe how pathetic this loser is - getting crushed under me and swallowing my spit :-D

One of my Favorite Northern Delights returns with a great clip!! She's got a nice new 1080p HD camera, enjoy her golden tinkles and brown splashes in stunning quality!! This Funky Canadian PAWG is a busy young mom, but all her clips so far have been quality over quantity!! Enjoy as she lets off a little Pressure in these great clips!!

The camera is placed behind the chair on which is sitting a girl wearing blue Japanese-style sandals. Her feet are pointed toward the camera lens the entire time. You can see the instep of her foot really well. Time: 7.07 min. Remastered - movie from 2005

Nicky pulls Alicee to the couch by grabbing her hair. She orders her friend to smell her jeans pussy and presses her face into it. But Alicee is fighting back - to much for Nicky's taste and Nicky presses her head on the couch and just sits down on it with her sexy jeans ass. She presses her jeans ass down hard on her friend's face - loves to be so dominant and feel her friend's face under her ass and pussy. Then she also starts to touch Alicee's jeans and gets even more horny. Humiliating and dominating her friend finally takes Nicky to a great orgasm and Alicee just has to take it!

He can choose: obey or d1e. Crazy Maddy and Joss have fun over a wormy guy and satisfied their needs for domination. His head is for the first time under girls' feet. They stand on it and make his head sink into the bed under their weight.

My toilet-slave have his mouth wide open, when the shit come out of my asshole.... mhh, is this a delicious fun to eat the shit of the lady... she is beating the cock of the slave repeatedly, if he refuses and chokes

Jerk for your life while i show no mery with my seductive body, my sensual voice and use of every little trick you can imagine. I wil get all of my wanted informations out of you. Teasing and brainfucking gets harder and harder and you slowly feel the fear coming up more and more intense. We both know you are only one little click away from your destiny. You can try to deny it but we both know already that this is your true destiny. You dreamed about it for a really long time already surerrender to your Goddess. Now its going to be about everything or nothing. Your brain will be fucked no matter how this will end.

The Giant wants to have some fun, but really needs to go to the toilet. Sadly there is no toilet nearby, and the Giant don't know what to do. But suddenly a doll comes walking by asking the Giant if there's something it can help the Giant with. The Giant says he want's to have some fun, but that he cant right now. I will help you with that, I will help you with anything says the Doll without asking what the problem is.Then without hesitation the Giant picks up the Doll, and place it on a chair, drops his clothes, and throw his BIG ASS down into the Dolls face. And without saying anything else he press as hard as he can, and dumps his shit right into the Dolls face.After the sweet shit has been crushed into the Dolls face, he FARTS out a ton of gas.All that gas that has been building up behind all that shit goes right into the Dolls face.

In this movie we use a hidden camera direct in the toilet to see girls pee direct from the toilet view. Nice 15 scenes of pee in interesting toilet positions 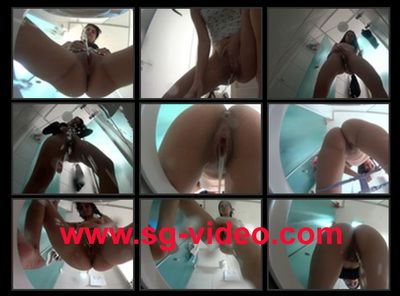 The waitress from the previous film is tickling our friend this time. She was also fastened to pipes with leather cuffs at the ends. Our waitress friend was tickling her feet, where she is most ticklish.