Oh no! IÂm starting to feel a little gassy while i tried on a new sexy green swimsuit. Must have been all those brussel sprouts which I ate yesterday! I blast stinky fartsÂshowing off my tight asshole and the huge swell of my hips and bubble butt! And at last the origin of my smelly farts emerges, as a huge cheesy long turd flows out of my asshole! Thanks you so much for enjoying my smelly fun with me. I love farts and shits!

Feebee the newest rising little star has her work cut out for her. She goes head to head with our BBW Sam. There is a massive weight difference but that does not stop Feebee at all. Feebee is feisty and gave Sam a serious run for her money. During their take down Feebee and Sam struggled, but Feebee literally came out on top getting Sam down first. From there Feebee worked Sam over with seriously sexy facesitting, winding Sam. After ramming her pussy into Sam's face, burying it deep in there, she switches to a cross body pin. a lot of tap outs from Sam she again now switches to a reverse. Sam was getting really tired, and struggled to get her much smaller opponent unseated, but was unable to. Stuck in reverse, Feebee used her tight little ass to smother Sam even more. You can hear sam's muffled cries, and see her face turning beat red. To make matters even worse for Sam, Feebee mounts her rival's face in forward, and decides its time to send Sam to dreamland, and secures her to the mats, her pussy one last time into Sam's face, and does not get off until sam's lights are shut off. Little miss aggressive sat proud on her victim posing and gloating her true victory.

So, you've a new job and now earn more money? And you really think you could spend it on your lifestyle?! We'll have to clear up that misunderstanding, pay slave! Everything that's not necessary for your pure survival ... you'll pay to me - you don't have control over your finances. If you were a real man - an alpha man - a man I'd care for ... then you'd get to decide over your financial situation and reap the fruit of your labor. But as a pathetic beta pay slave you can't. You only go to work and live with the bare minimum - so I can reap the fruit of your labor!

Miss Maria J .: One of the most humiliating tasks for a foot slave is to lick the mistress's dirty feet clean. I am not sure if you are enough foot slave to do such a task ?! Would you be willing to lend me your worthless tongue as a foot washcloth? Would you crawl to my feet and worship me and ask to lick my dirty feet clean? Are you ready? Now? Then crawl here foot slave!

I approach the immobilized slave in a sensual way, caressing him and examining him. Yum yum I exclaim and he thinks it refers to the fact that he eats too much and is fat. It's true, but I explain to him that my intent is to eat him as my afternoon snack. I bite him on the belly, on the chest, on the hand until his taste and his moans satisfy me.

Lying on the floor, naked, with his cock in a cage: my slave is in chastity and today he will have a sweet but merciless treatment. My body is irresistible, just heels and lingerie, I play with him until his balls swell even more. His hands are tied, he can't touch much except what I give him. I stroke his cock, my fingernails on swollen balls almost feel like pins on a balloon, I sit on his face and let him feel the keys to his freedom that are in my panties. He takes my spit, in his mouth and on his cock, I lie on him, I rub myself, I make him feel my body and his caged cock would like to explode. In the end I take the keys, insert them in the lock, let him believe that he will finally be able to jerk off and then all of a sudden I take the keys back and leave him there with his purple balls.

I was shopping with my Slave in Bremen. But I didnÂ´t find much. Of course it was the fault of my slave, because he suggested Bremen. So afterwards he was punished for his bad suggestion. So I took his belt and he had to lay over the couch. 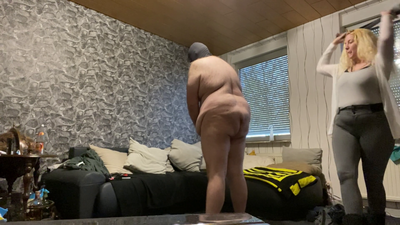 I've bound the slave and now he's lying on the ground under my nylon-clad feet. I take my lipstick and write LOSER on his forehead before I start to stuff my foot into his mouth! I want this loser to accept his place and accept his degradation! In between the foot gagging I spit into his face and into his mouth a couple of times as well. After humiliating him like this for a while, I order him to put my boots on my feet and give the heels a proper blowjob! Then I start to spit on my boots as well and coerce him to lick the spit from my boots! This is a non-exclusive custom clip for a fan. If you want me to do a custom clip for you, send me an email to marissa@madamemarissa.com!

After a big dinner this morning I can feel the shit just piling up inside of me and I need to let it out! I bend over the chair spread my chubby ass cheeks and let the shit fall right out of me on the plate. The sound my shit and asshole were making were so moist and delicious I love hear to myself shitting and farting! It was so warm and spicy tingling on my butthole since IÂd eaten some really spicy food the night before! It turns me on that you love watching me take stinky shit! I love teasing you with my shitty dirty asshole! I enjoy holding all my shit in until my butthole cannot take it any longer, then letting my butthole shit it all for you!

I love my high overknee boots, but when I wear nylons with them I quickly start to sweat. So now I wil take off my boots and let you lick my wet and sweaty nylon feet! They are really wet with sweat and you will sniff and lick them for me while I verbally humiliate you!

Kira is already tired of all her previous slaves and today she wanted to check the slave girl christina. She heard about her loyalty and decided to test her herself, to see how well she fulfills orders. First, Kira ordered christina to lick her boots after the street. The slave girl didn't want to disgrace herself in front of Kira and very diligently cleaned her dirty boots with her tongue, not missing a single spot. Then Kira ordered to take off her boots and worship her sweaty socks. "Ok. My feet are sweaty too, whore. Lick them!" - Said Kira and christina diligently began to lick the sweaty feet of Kira. After thoroughly worshiping her feet, Kira revealed that her boots were still dirty and she pointed this out to the slave girl. christina apologetically began to lick the remaining dirt from Kira's boots. After such a mistake, christina will hardly become Kira's favorite slave..

Leah has been REALLY REALLY constipated lately and her poo has been all BLOCKED UP! The video begins with her trying to take a shit on Jimmy's face, but only managing to squeeze out a few pebbles! Leah STUFFS HERSELF with taco bell, lets it all digest overnight, and then does a BIG MORNING WORKOUT! You get plenty of great POV ass shots as she works up a sweat! The video ends with her POV Releasing her Constipation with a FAT HEAVY LOG right over your face!

Week 43: Sneaker As always, each of the products will only be available once in my store - so don't be late and get hold of your very own personal item of Mistress Isabellas #StinkySale.

How beautifully well-behaved the slave sits there for hours in the corner. Quiet, attentive and always ready for his mistress. In fact, Goddess Yasemin wants him to take care of her sexy feet right now. She pushes them towards him so that he can take off her high heels. But it will not be pleasant for the slave. Goddess Yasemin wants to walk around on him and see him suffer under her weight. This trampling virgin now learns how it is to be used as a doormat.

This young cuckoldÂs Mistress rocks what might be the most beautiful pussy in the whole world. Just have a look at that smooth pink flower locked in between her hips and you will understand what we are talking about. Tonight the cuck is real lucky Â he will be allowed to taste his ladyÂs precious hole. He will actually even get to lick it clean after it gets stretched and jizzed by some other guy.

Princess Nikki and Lyen Parker have a game in mind for their slave. Princess Nikki knows the slave is a sucker for a smelly and moist armpit, and the Princesses have been very active today. So Princess Nikki have the slave sniff the armpits of both the Princesses.When he is done Nikki have a game in mind for him. If he do good he might receive a reward, if not, there will be punishment.Since he now should be costumed to the smells of all four pits, he has to close his eyes. The Princesses put a armpit on his nose, and he must guess which Princess, and which arm. Princess Nikki is really amazed he had wrong only once, and cannot believe he did so good.But nevertheless there is a heavenly reward for the pit lover. He is allowed to clean all armpits of the Princesses. They are very sweaty so he needs to do a good job! When he is finished, he has to smell if there is any odor left.

Whether mutt, duck or toad in my zoo you can find absolutely any creature. In this video you can see how I deal with my little animals. I make sure that they get enough exercise in the fresh air and feed them with lots of treats. Every now and then I even practice tricks with them. However, I should perhaps rather deliver this creature to the next slaughterhouse. Who is too stupid for tricks and too fat for my exercises, can then at least make a good figure on the plate. See for yourself!

Spider & Fly Â A fantasy roleplay in 4 scenes. In my torturechamber a slave dung fly goes in to my net. The victim caught in my net hopelessly and fidgets until his end. I will torture him with great relish and let him feel pain for several days. After he signed his last wish for my favour, I will give him a malicious dose of spider poison for his last breath. In Scene One mean spikes dig into his fly body.