beautiful mistress jenna dee is back and she didnt come alone. her friend lady chantal is with her and the first time with us! both are two gorgeous ladies and we made lots of cool new clips with them. today we have the first with a slave sitting on a chair awaiting the ladies. this slave is into talking back, telling idiotic things to his mistresses, but they have their methods to make him quite. first the bind his hands below on a chair and give him some slaps across his face. but still he talks back, even when the ladies slap him harder. so they also bound his mouth with bondage tape. better now they are really getting into the face slapping, slapping his face harder and harder. even their hands getting warm so they put on gloves to protect themselves. but of course this means that the slaps gets more harder across the face of the slave. in one sequence jenna dee really gets angry and lays everything into the slaps she has! excellent clip!

A difficult move that beautiful Randy is trying to execute properly ... It' is not so well done as the one by Liz in "Holds from Hells I" but still very effective as Steve cannot get out of it and starts turning purple, crushed by her beautiful long legs !!! 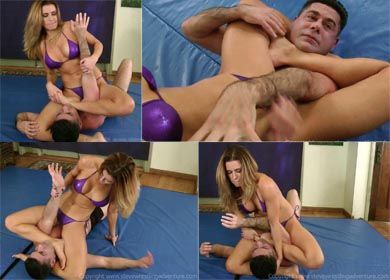 Hot chick Julia sits down on you carelessly. She just wants to flatten you under her butt and enjoys you being her seating cushion. First she crushes your nose under her tight jeans - but Julia wants more! She takes off her jeans and then you get to be so close to her almost naked ass. You're just her living seat!

Lady B crushes many big Balloons with her Gumboots. She step and jump on there.

Haha! :-D Your tiny stub is soo pathetic! You are a real fat ass loser! And you'll never satisfy a woman! You are not a true man! You are a wimp only! And the only thing you can do is being a joke! I have to laugh soo bad about you because you will never ever become a man!!

Watch our new model Dorothy gets bound and tickled for first time ever on camera! Her ticklish, sensitive 18 years old soles are so close as if you tickled them!

Karina wears her beige jeans today. Additionally she wears a yellow Bandeau bra - and just looks awesome! Still dressed in them she enters the shower and let the water run above her sexy body. Lot of water is soaked by the jeans and so they turn darker and darker over time! This makes her so hot that she starts to moan - and places the ray of water right between her legs to stimulate herself even more! You are allowed to watch her - and come soo close to her! Karina is so fucking hot and she has an awesome jeans ass!

Watch me as I have an apple crushed, barefoot, with my beautiful feet with painted red toenails.

Roy is any Goddesses or Giantesses dream pet! He did something special for Katelyn. While Katelyn was out at work he went and talked her twin sis into bringing his little shrunken butt to the market so he could get Katelyn a surprise. Katelyn is absolutely thrilled with her surprise -- a Divine chocolate bar!This very Divine chocolate bar is Katelyn's first ever taste at it. She already ate a little bit of it yesterday but since Roy likes Katelyn's mouth so much she's going to let him in on a chocolate eating peek show today! She tells him she hopes he enjoys the show and brings him very close to her mouth to begin their indulgent.While she eats the chocolate she moans and talks about how she wishes his tiny little body was trapped in the very chocolate between her sexy fingers. However, she doesn't want to eat him just yet, because of how good he is to her, so just the teasing alone is very satisfying for her too!After a couple minutes long of teasing roy with her sexy and revealing consumption of the scrumptious chocolate she tells him if he keeps up the perfect pet attitude then he'll be living one hell of a marvelous life with his giant Goddess! She stands up and rubs her belly in satisfaction. She then grabs the chocolate bar and heads out to work.

Goddess Cleo humbles her foot slave as he pleads and begs at her feet. She has a naturally commanding way about her, when you tells you to get down on your knees you'll eagerly obey. As he humbly kisses her feet she crushes down on him as though she wants to literally grind him into the floor under her shoes. Lots of verbal humiliation, trample and foot smothering as Goddess Cleo dominates him with her feet.

Deeply on his knees, my sniffing pig .... Inhale the smell of my socks. This wonderful smell you robbed your senses and your tail is stiff - alone just by looking at the preview image or? hahahaha

This was taken at a local foot party, so it's all candid. The addictive Miss Kimmy is collecting money & slaves. She pats this desperate, black male slave on the head and says "That's a good bitch.." This session was so scarring for black slave that he's offered himself up entirely for Miss Kimmy's personal use & benefit.She made sure Her toes were nice 'n sweaty and stinky, with some dirt on the padded areas of Her soles. Then She bragged afterwards about Her new, certified bitch acquisition & how She fucked his mouth real good.Poor loser has to cough up his cash to Her Highness too - She's not doin' this 'cause She likes any of these guys (*She's got a boyfriend...stay tuned for an especially humiliating clip that might feature Her boyfriend)

You quick sneak over to Daphne's muffin and eat away at it, while thinking she's distracted. Within seconds she looks down to you and you begin fearing for your life. You know she sees everything don't you? There's not a single thing she misses. She tells you to get away and step back from her snack, NOW!Next she picks you up, tells you that she makes a meal out of her bad slaves, and shows you her belly where you will be ending up. As her hands grace her boobs she tells you her original plan - today she was to reward you for being so good. She was going to let you have a little boob time as she knows how much you love climbing her mountainous tits and getting lost in the valley between them. But now you are going to be her meal instead since you wanted to try and steal some of her snack.Daphne dangles you high above her mouth and tells you what's going to happen. She's going to eat you up. Put you in down in her carnivorous mouth, play with you with her tongue for a little while, taste you, and digest you. You're going to make such a little appetizer!You try once again to get at her snack and get away from her, bad move! While holding you close to her mouth she goes even more into detail about what's going to happen when she eats you. Then she holds you up high, your last view before being slowly lowered into her mouth is her boob boobs and her beautiful face.She gulps you down she talks to you while you're still alive inside of her. She can feel you wiggling around in there, mmm! But pretty soon her tummy acids are going to chew you up. She can even feel her tummy gurgling so it won't be long until you're all dissolved by her stomach acids. She's still hungry but that's what her snack was for! She sexily takes a pinch of her muffin and inserts it into her mouth to send it coming down after you!

Tatiana and Mia meet for their last encounter, and it was quite the show. Both girls will stop at nothing to win, and have this love hate relationship going on. Tatian is tough, but so is Mia, with breastsmothers, facesits, and scissors, who could ask for more with these drop beauties. One girl will reign supreme, buy this clip to find out who. With back and fourth action, it's gonna be a close one. With an ending that has one girl tapping out alot before she is even released, or aloud to breathe!

Well, I surely know my slave hates spitting - but I want him to love my spit! I keep him on a leash, bind his hands behind his back and push him on the couch. Then I get on his chest, make him open his mouth and spit into it again and again! Every time he dares to close his mouth I make him open it again right away - but I miss his mouth a few times any way - no problem - in the end I rub all the spit that missed his mouth all over his face with my crop ;-)

Do you remember the video Footscratch for Breakfast? That time Dorothy vowed revenge and prepared her soles for weeks to make this clip! Well, more precisely, she did not do a single thing to take care of her soles! The results are more than amazing: she totally destroys Clarissa's face with the huge amount of scratched skin and makes her swallow no matter how disgusted she is!

Brand new cruel Bitch Miss Tiffany would rather kiss Her best friend Sonia than kiss this loser dude. However, She'll exercise Her Girl Power and take his money for letting him take Her boots off.She's so generous; She lets him sniff and lick Her stinky work socks (*She just got off work, we met up w/both Girls outside of Their work). slave gets to worship Her bare feet too & watch Them make out.