Miss Chloe Amour kicks back & enjoys a foot massage after going clubbing. She stopped by & gave us the honor of filming Her on a late Saturday night after leaving guys in the dust during Her nightlife outing. Awesome close-ups of Her gorgeous, smooth soles. Enjoy!

Fiona is the kind of girl who loves to gamble and it seems like she just won her last bet with this stupid loser! The result of that lost is that he will have to deal with her sweaty feet in his face for a period of sixty minutes while she is watching three episodes of her favorite program on Starflix! It seems like it was one of her fantasy! After they both have come to an agreement, she makes him takes her boots off and completely smothers his face with her sweaty black socks! She has been wearing the same pair of black socks for a full week to give him a challenge and she is just coming back from another eight hours shift! Those are probably the smelliest socks ever! She takes pleasure to rub them all over his face with her cruel smile and makes him stick his tongue out to lick the dirty bottom of her socks! Fiona is the one who makes the rules so she makes him take her socks off after the first episode to really feel what its like to rest her feet on his face! She takes pleasure again to rub her super stinky feet on his face and makes him stick his tongue out to lick the sweaty bottom of her soles! It seems like Fiona really enjoyed that first experience with a foot slave at her feet! For sure well have to make another bet with this girl! Super Hot Clip Alert!

Squeaker is the smallest seat to ever lie down for a ssbbw on FWP. How he manages to survive, without breaking, under the 530 lb Luscious Luna is beyond anyone's guess.With Squeaker weighing about 145-150 lbs, you have to figure tossing around 500+ lbs of powerful woman on top of him is relatively dangerous. You wouldn't know it from Luna's reactions though as she laughs and pokes fun of the moans and groans that come from Squeaker as he struggles to survive under her beautiful, gargantuan ass.That's part of Luna's charm. She's not overly dominant per se. She's not going to put on a show of meanness. She simply going to let her massive weight do the talking and allow the response to it amuse her as if the life and struggle unfolding under her was "another day in the park."At one point, as she's grinding every pound into his chest and belly, she jokes about "massaging his intestines." She finishes him by sitting all 530 lbs on his face with no supportive cushioning under his head. It's the perfect mixture of light hearted fun and punishing squashing.

Katelyn arrives to her wrestling match and she's surprised to find that her opponent is a shrunken man- how does he ever think he's going to win? It doesn't seem like he has any special abilities or anything to make up for his small size either because she pins him underneath her massive feet (in comparison to him) like he's a mere toy!While sitting she pins him under one of her feet, verbally teasing the crap out of him, and then she stands up and shows him how easily she could crush him by placing her heel between her legs and the ball of her foot on his chest while raising her other foot. Then she uses her nails to tickle torture him- oh, he hates it! After that burst of amusement, she even pins him underneath her boobs!Looks like she won! Perfect that he's already shrunken too, because she actually... eats her opponents when she wins! Yep! She tells him that he'll now be sliding into her mouth, down her throat, and living in her belly while her body ever so slowly digests him. She opens her mouth wide and swallows him whole, and gets SUPER bloated from eating him. Phew!Next she turns around and looks at the coach. Eating her opponents whole is her secret to staying strong, and she hasn't lost a match since doing so. He already knows she'll have to eat him too so no one finds out so it's no surprise to him when she rubs him all over her big bloated belly, but it is a bit torturous listening to Zach who is painfully digesting inside of her.After sending the coach down to join him, her belly bloats more then ever. Oof! She can barely even talk or move with comfort. Walking around and rubbing her belly helps so she does exactly that, while talking to the shrunken men inside of her, and then heads out.This video features an anatomically correct doll, pinned under bare feet, tickled, pinned under bikini boobs, doll sized vore, swallowed whole, red lips, big bloated belly closeups, two dolls get vored, rubbed against Katelyn's bloated belly, some underneath belly pov and pov from Katelyn's view looking down.

This is what you call a dick? Ha, ha - for laughing out loud!I can't stop laughing. It's so very tiny!What do you want to do with this tiny thing? Nothing!You can pay me money as compensation because it is so tiny.And from now on I am your money mistress!

You are so dumb and low life and I like it this way. All you do is spend money on me, get drunk and stroke your cock all night long. You gonna get drunk really fast and orgasm for me again tonight. After all, I am ALL you need.

In this video i crush, stomp, squish and destroy a lot of vegetables with my wedges Anne Klein shoes. Theses shoes are for sale and they are very worn and smelly

Mistress MaÃ©va read a people magazine while her slave clean her school girl's shoes with his tongue. the shoes's soles are very dirty and the slave lick them over and over.

You just can't take your eyes off beautiful women's legs wearing fine nylons, can you? But tights aren't just nice to look at. To give you an impression of other ways to enjoy nylon I prepared a little task for you. And if you're a good boy and fulfill it you will even get a small reward.

Hot snobby blonde Princess Sierra has normal sex w/normal guys, so She thinks dudes w/fetishes are weird. She puts this loser under Her chair & ends up laughing HARD at what happens next....This guy on the ground loves paying cute Girls to tickle him w/Their feet. She takes Her sneakers off right on him, then peels off these sweaty little footies She wears inside Her shoes to catch all Her Princess foot-sweat.She's a complete Bitch to him, talking down to him & reminding him that he's pathetic for liking this. The hottest part has to be the end where She convinces tickle-boy that the people out there watching wanna see some foot worship, so She runs Her sweaty toes along his tongue & shoves Her foot right into his mouth.(*She also looks right into the camera & invites any of you out there who wanna get tickled by Her to email Her!)

Its the smell of love my pet!! My soft cotton panties pressed against my warm, wet pussy and my sexy heels ready to be sniffed and licked! I am going to send a sensation through your body, as your balls fill to the max screaming for a release. 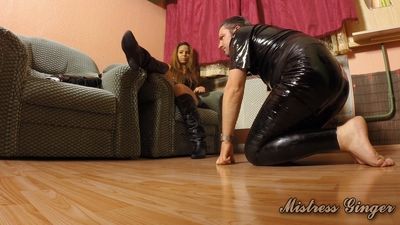 I'm on my way back to my car when I find a bunch of little cars on the side of the road. I decide to crush them under my high-heeled Buffalo boots before going back to my car. Some of them get crushed slowly, some under the boots' soles, some under the heels, some just get stomped! When I'm halfway through the cars I see a friend of mine walking on the other side of the road - I quickly wave and she comes over. When she sees me crushing the little cars she decides to join me - fortunately she's wearing wedge heels that can easily crush the little plastic cars. When all of the cars are crushed we walk to my car and I decide to have some more fun - by crushing the remains of the little cars with my big car! I drive over them FAST a few times, scattering them all over the road and then drive over them slowly as well. In the end I even do a little burn-out on them before taking off - that was fun!

Stella's girlfriend Juli was at the gym. Stella makes bondage on her. First, she bind her body. When Juli lies on the belly, Stella binds her legs together. Then the arms tight to the back and connects them with the legs. At the end of this clip Juli is trying to get free. But it does not work, now. Beautiful close-ups and great bondage scenes.

Mistress Lea and Mistress Kitty meet a slave's fan. They use him like a footstool under her ballet shoes, trample him, crush his hands, Mistress Kitty make him lick clean her dirty soles while she trample him, and they finish by destroying his face with a hail of slaps.