There are not many pleasures bigger than cleaning Mistress Lara's feet. But any slave is expected to do a very good job because she likes her feet and shoes to be perfectly clean. This time the slave is required to clean the soles and heels of Lara's shoes, sniff and suck her nylons and, of course, kiss and lick her divine feet!

What a tasty ass. Melissa shows you her hot nyln ass right in front of your nose. This hot ass is only inches away from you. You wanna touch it? Or press your face against it? Download the clip now!

Twelve minutes of pure footworship with Clarissa and Eryss. No talk, no story, no reason, just two beautiful girls licking each other's soles as if it was their last resort!

Request: "Scene 4: Toe biteSince their strategy is failing the mistresses decides to team up and kick Natalia at the same time. But Natalia just catches their feet again and has them hopping around in total and utter surprise. Now Natalia want to put a stop to this and she bites down on one mistress?s big toe, then the others and last on both at the same time. Show more surprise than pain please. As Natalia let go the mistresses hop around on one leg around nursing their aching toe in their hands. Natalia laughs at them, quits her job working for those bitches and leave them to whimper and sulk as their feet can do no more damage today ? neither to slaves nor to maids. As last time try and be a little verbal (English/Polish). Let the mistresses tease and almost flirt with Natalia in the beginning. Overdo the expressions and the action a bit, and go slow and be careful so no one gets hurt."This clip was made on special request 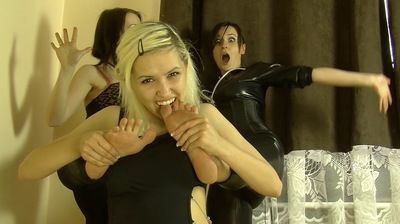 BBW lady Cathy plans a double punishment today. Her slave and slave girl will serve her at the same time today as one face isn't enough for her big ass - that's why she just takes both of their faces to sit down on. She sits on both heads and flattens them. Her slave endures the punishment pretty well - but her slave bitch starts to moan really fast - but that's the way as Lady Cathy's slave girl - she's flattened and has to endure the weight! So which face is going to please the mistress properly? In the end she orders her slave girl to sit down on her slave's face too - only to show him and the world that male slaves are always at the very bottom.

I got a new thing to play with: bubble pack. I like to hear the rustle and the splitting of the bubbles. With my sexy red high heels I crushed the bubble pack in a slowly way. 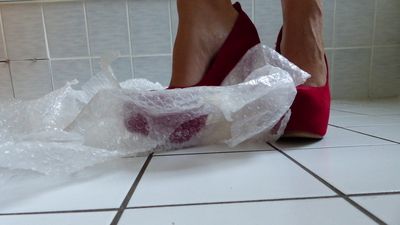 Holy Fuck! Here is another and amazing clip with this Bratty Chix! Monica was mad at this loser for some reasons so she wants to give him a good punishment! She's coming back from a big party downtowm so she orders him to lick and clean the bottom of her filthy boots! Stick your tongue out and lick all the dirt! Monica also wants to make sure he remembers about his daily tasks next time so she takes her boots off to completely smother his face with her sweaty nyloned feet! Take a deep breathe! What does it smell after dancing all night? She laughs at his face and orders him to lick the stinky bottom of her nyloned soles! I want you to lick and taste my sweat now! It seems like you can't contest Monica's authority!

86243 - Drowning his expensive watch in spit and stepping on it

My slave almost had a heart attack when he saw what I did to his expensive watch in the "Having 2500 Euro under my feet" video - this time I'll not show it to him later - but make him watch it as it happens. I take the watch off his wrist as he's sitting in the kitchen and place it on the counter. He's confused at first, then gets a little nervous when I start spitting on his valuable - and not waterproof - watch again and again. When I light up a cigarette the watch is already lying in a puddle of my spit - but it's about to get worse for my slave! I not only use his watch as my ashtray and spit on it a few more times - I also put the cigarette out right on the watch's dial! Then I get off the countertop, grab my well-worn, dirty and smelly sneakers, put them on and start to step on his watch. He knows I'm not going to show any mercy and couldn't care less if it breaks under my feet. I even make him lick the spit, dirt and ash mix from my sneaker soles before I step on his beloved watch some more!

Mistress Jade has a nice job for you. You know it's humiliating, and that?s what you secretly crave, isn?t it? You'll lick her spit off the floor, just like she demands it from you, and she will produce a lot of spit. Watch her, and take care to lick EVERY drop of spittle from the floor! And then you?ll swallow it all. What else did you expect?

Wifeys in the next room & She wants Your Attention. She wants to talk to you about "something important".. But U couldn't care less. The ONLY Thing that is "Important" to YOU is my perfect pretty lil feet. We BOTH Know there's NO Decision here.. it's my feet & Your NOT going anywhere! LOL

Kiss, lick and massage my ass. Your cock is locked and I have the key! Worship my ass to get the key back...custom video

Now be warned that this clip is fucking vicious. If you aren't into extreme cbt, don't even bother buying this. Even if you are into it but you are scared for your future health in that region. . . don't buy this clip. For the rest of you who just need to feel this pain, let's have some fun. Here are a few things that you will need to have in order to complete this clip as instructed. Make sure you have at least most of them before you start watching. You will need some icy hot, some sort of really spicy sauce will work too but I prefer icy hot. You will need a stapler. A candle. The ability to heat up at least a cup full of water to a boiling point. Or a curling iron if you have one. Also a q-tip. Have all of those and a real need for pain and then buy this clip. I am serious though. I am not responsible for any damages to your person because you are too stupid to say no to me.

The Doctor will see you now. Be seated while we explore your inadequacy as a man, and discuss your sexual frustration. Don't be alarmed - I'm a professional. My demeanor and professional attitude are traits that you will find beyond reproach... Don't be frightened off by the reports of some of my patients - The ones that detect a subtle smile on Me during our sessions, a hint of amusement as I inform you that you are in fact quite inadequate as a male with your small penis and lack of sexual satisfaction.; a growing smirk as the session proceeds.As part of your therapy, we will need to have you masturbate in my presence. Although unorthodox, I open my white coat and allow you to view my breasts and panties during the session. The session ends with Dr. Fang allowing you release, but sternly advising you that you will require further sessions.A special discounted clip that is the first in a series and sure to become another instant classic!!

Look at 18 year old Lisa, Mark has the camera & films up at her whilst she tramples all over him, then into the clip she sits on him, her slave deserves to be beneath her heavy body all of the time.

A MEAN BRATS PRODUCTIONChanel is at it again, this time recording selfies from her video camera while sitting on my face! 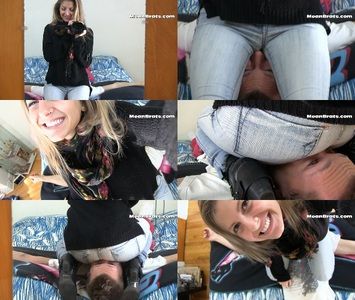 Lady B becomes a brand new Train for to crush him. She build a circle with the Rails and let the Train drive. Lady B crush the first Train. She standing with her naked feet on it and crush him after with her hard wooden Mules. She jump and twist on him . Now the take the next Train and let him drive for the Mules from Christin, Christin crush the Train in many pieces under her Buffalo Mules. At last both Ladys crush all the Buildings and the Mountain . Now, the brand new Trainset is completely trash!

Kate lures you into buying her clip with her good looks! She's leading you on to believe it's going to be something kinky, perhaps even a strip tease? Well maybe it is! Go ahead and buy the clip! Forget about reading the rest of the description and take your chances with her! You won't regret it and you'll be in for a FUN surprise!SPOILER ALERT: DON'T READ FURTHER, UNLESS OF COURSE YOU DON'T LIKE SURPRISES! IN EITHER CASE, IT'S A MUST OWN! YOU CAN TRUST KATE!"Hello! So you really took a chance buying this clip! What exactly were you expecting? Something naughty? Something different? Well I'm sad to say but...you just wasted your money on a stupid clip that's not going to show anything that you paid for. I'm going to stuff you under my bed!" Kate says giggling as she takes you and shoves you under her bed! "I'm going to have FUN with your wasted cash! Wooo!" she says laughing as she jumps up and down on the bed above you! "You guys are idiots!" she laughs!"Can you see it! Your hard earned cash that you spent HOURS working for just drifting away!" Kate just stole all your hard earned money

Mistress Demonia smoke a cigarets while her house slave lick clean her dirty boots. The slave lick her dirty soles, suck her heel and Mistress DÃ©monia spit in his mouth and use him like a ashtray.

Denise gets stressed out by her job a lot - and she takes out her anger on the office slave just as often! She steps on his naked chest and tramples him wearing black boots, blue jeans and a black shirt. She just can't help it - she loves to see men suffer underneath her feet - and that's why she isn't going easy on him either. She bounces on his chest, steps on his face with her full weight and grinds the heels of her boots into his skin. After a while she takes off her boots, tramples him in socks for a short time and then continues to trample him under her sexy bare feet. Of course she isn't slowing down now and continues to stand on his face, jump on him and uses him as a living dance floor.