Sexy Mistress Sabrina loves to sit on her slave. With her ass right rest on his face - the perfect seat for her. Lady Sabrina loves facesitting! His slave face is very comfortable and therefore the ideal place for the lady! She stays sat on him for a long time and takes all the air out of him. He can only breathe when she mercifully lets him take a short breath. But she doesn't give him long before sits on him again with her sexy ass!

Three sexy, sadistic, and perverted Japanese Females using there male slave as a toilet !! The clip starts with one of the Japanese Mistresses using a dental dam to force the pathetic males mouth wide open, to use as there toilet, the slave is unable to move as each sadistic Mistress whips and abuses the slave, this is followed by multiple scenes of the perverted Japanese Mistresses taking turns pissing and shitting into the toilet slaves wide open mouth !! until his mouth is full of shit, as he eats it some of it, the stinking shit is smeared all over his face and body !! one very attractive Mistress, pukes up over the pathetic slaves shit filled mouth !! very fucking nasty and extreme clip !!

Your destiny is to become my living recycle bin - yeah, you heard that right.I will use your mouth for very spoiled food which I need to throw in recycle bin! I have prepared a delicious meal for you! I'll spitt on it and you'll swallow all of it.Get your mouth open wide, eat and swallow all immediately!

My little asshole fired creamy turd ÂbulletsÂ like there was no tomorrow in this one. Includes some nice & messy wiping action (it sometimes happen that you shit a little again suddenly while wiping hehe) This you can see in Toilet Time 32Have you ever taken such a soft & explosive shit in your life that some of it ended up splattering on top of the toilet seat? Of course not, but IÂm quite good at it as you can see in this one from Toilet Time 33. Even marked the action for you in red in photo 14 and 15...

I'm traveling today, and I have to check some business arrangements. So I brought my slave along to assist me, at times he can be a bit stupid and requires a good slap. However, as I'm too busy to pay attention to my bitch. I have ordered him to lie down under the desk and clean my boots. I have warned him he better get that tongue of his licking and make a good job. If not, I'll find the time to punish him severely. What a lucky slut he is to be my bootlicking worm...

The sight of my perfect and big tits will manipulate your brain and make you dependent. You'll have to watch this clip over and over again because you just can not help but worship my boobs jerk off! 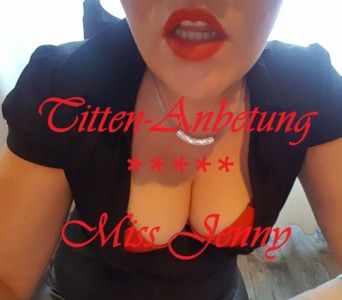 A woman is no her way to work when suddenly she is grabbed from the sidewalk! There are two culprits and what they do is lift up her skirt and then penetrate what seems to be a syringe into her asshole! Not long after, they make a run for it! At first, she doesnÂt understand what they did to her, but she later realizes that they gave her an enema! This caused her to desperately look for a toilet to relieve her rumbling rectum, but with none in sight, she decides to settle for a secluded area! There, she takes off her panties and then squats on the ground where she releases all that she can! By the end of it, she leaves a massive pile of feces!

You need more humiliation, the filthier the better. ItÂs pretty obvoius that my slaves want to experience something very special. EveryoneÂs got his certain job, and now you get the best. IÂll teach you discipline and drill you to becoming my toilet slave. ItÂs your lucky day, cause you also get some new friends: Aunty Toiletseat and Miss Toiletbrush. You little toilet pig will make sure that everythingÂs neat and clean and IÂll control that. Tounge out and lick everything clean, you little tampon sucker! You wonÂt use the brush, thatÂs reserved for your dirty yellow teeth in the end.

Shitty slaves, come here for a coffee with me? But after this coffee, you will be my human cease. Look what will come out of my ass and you will have to swallow everything. mmm, how good :))) !!!

Sexy Lady Liana shows you her sexy hands and her long fingernails. She knows your preference for hands very well and lets you enjoy the sight of her hands. What do you like best? Her fingers, her palm or her sexy sharp nails? Would you like to worship her hands and fingers? Liana's gorgeous hands deserve nothing less!

A sweetheart is desperate to defecate so she rushes into the company bathroom and immediately makes her way to the toilet! Due to her rush, she fails to realize that somebody has installed a camera in it, consequently recording her every move! After she takes off her panties, she squats on top of the toilet and then makes herself defecate! In the process, she would release burst after burst of foul farting! She would also produce a strong stream of piss along with her poop, creating a large mixture of filth!

0159 The slave is broken! His movements are blocked, and he can no longer harm his Mistress.He cannot say that he does not want it. The ass closes the way to the air and torments the slave. The slave lies with a large puddle of drool on his face and without air. Mistress Bertie is merciless, she behaves like a bitch and humiliates the poor slave by tying his hands. Her big round ass presses his face. The slave does not want to be dominated by a young girl, because he is ashamed. But actually ... he really likes it.

The two Findommes Queen Hanna and Mistress Jane really want a new submissive money slave. You know who it is now? Exactly! YOU!! You, you miserable loser, will fulfill the expectations of the two mistresses, understand?! So be a generous money slave, because only then you may lick their sexy high heels as a reward. Mistress Jane is already rubbing her hands together in anticipation of your money. So let's go! Give the two ladies your money. Satisfy them with cash!

Today, I'm with my very good friend Mistress Ezada, we have our slave ready and prepared as he's going to be our fuck puppy. He is tightly bound to make sure he remains on all fours like a good little puppy. There's no way he can escape, and his ass is nicely exposed for us. However, we want to add to his suffering so we decide to put his balls in a ball clamp and fasten it really tight. So nice to see his balls turning purple, as we get ready to fuck his ass. We lubricate our strapons, and taking turns we begin to fuck out little bitch. It's not long before he begins to squeal, and as we are having so much fun we can only laugh and fuck him harder. His ass still seems a little tight, and as we want to give our puppy a new tail, we decide to finger him and get it opened a bit wider. We then get both our strapons and shove them into his ass together, he squeals for mercy as we pleasure ourselves with a double strapon in his sorry ass. We then get his new tail and plug it in. As a show of gratitude, our bitch has to give his ass a few shakes before we take him out walkies to show off our fuck puppy's new tail...

I can't stand this loser's creepy smile - and I'll make sure that his smile vanishes! I start to kick him hard with my riding boots - with each kick throwing him against the concrete wall hard. After a bunch of kicks, I order him to lie down on the ground and trample him - I stomp his weak belly under the hard soles of the riding boots and even stand on his head and throat with my full weight. Then he has to get up again - and the kicking continues!

Includes - cuckolding - mind fuck - blackmail fantasy - chastity - chastity device - tease and denial - high heel fetish - high heel worship - verbal humiliation - ebony Goddess - femdom pov - mind fuck - foot slave training - manipulatrix There you go... Right on the floor where you belong...Awww, you almost look pitiful!Almost!Shame your evil cuckoldress wife has no mercy for you! She enjoys seeing you squirm in discomfort on the floor as her feet hover deliciously above your face. Do you want to lick inside the shoes? You know, like she lets you do after she's been out all night...? So you can really taste the sweat from between her toes knowing she got her feet so sweaty walking to cheat on you?I bet you feel your cock straining against that cage right now don't you? Knowing that you put yourself in this silly position... When all you needed to do was wait like a good subby hubby until she came back and let you out as usual. She smiles...Maybe she will leave your key with tonight's date. For safe-keeping you know... Mmm, wouldn't it be a shame if he never called again? You'd be locked up for a really long time...