Girls start with Martians. Lyuba is 1st again, and her blue one looks bigger. Anyaâs pop in hands. Girls are going to continue with worms, but Lyubaâs is rocket-deflated.

Another clip with Madison and me - and again we start by trampling the slave under our converse shoes. As we stand on him we make him kiss and lick our shoe soles, spit on each other's shoes and make him lick the spit from our shoes and shove our shoes into his mouth. After some time we take off our shoes and he has to smell and lick the inside of our sneakers while I continue to trample him with my bare feet and Madison with her feet in socks. This was a non-exclusive custom clip for a fan. If you want me/us to do a custom clip for you contact me at marissa@madamemarissa.com!

Sexy young girl Runa sits at her bed and thinks about what she can do. After a glance into her handbag she decides to paint her toenails. Of course it is much more comfortable being naked while doing so - so she doesn't waste any time and starts undressing herself! Then she stretches her foot against the bedpost to make the paint job much easier. Toenail after toenail she paints them until all of them are painted dark! To help the paint dry faster, she decides to blow and lick her toes finally...!

A nice little slave task for you to obey My orders and follow My instructions to the letter slave! you will need a empty toilet roll, lotion/oil, piece of cardboard, string and a marker. Make sure they are ready! Stunning views for you legging lovers out there, and just relax and obey Me. I'm in luxury hotel room as you perform this task just for Me.

In this 7-minute clip, I am decorating my tree for the holidays. I am in desperate need of a pee, but I can't be bothered to go to the bathroom before I'm done decorating. I try to hold it by squeezing my legs together and holding my crotch, but my desperation soon becomes too much for me to take. I suddenly lose it, and warm pee quickly hisses down my legs, totally flooding my skin tight jeans all the way down my legs. I am left standing in a huge puddle of my own piss with soaked pants, socks, and sneakers. Enjoy this huge jeans wetting! 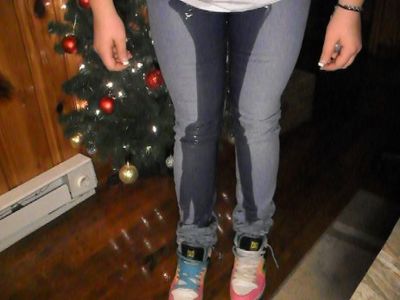 The foxes are tricky and smart creatures. The girls are like the foxes. They use you for their pleasures and they take a last penny from you. We have three foxy ladies: Teodora, Joss and Maya. They smash his stomach under their asses full weight.

*REQUESTED! (ON GOING STORY!) *If possible to do another alien it takes after waking from the previous clip, not sure if it was part of a dream, however what you felt, could swore it was real. Eventually you decide to shower. As you taking a shower, lathering yourself with soap, eventually you get to your stomach, cleaning out your bellybutton and the alien starts to move vigorously. Bewildered, you turn off the water, trying figure out what is going on, you hear it tell you to start playing with your bellybutton. Scared, you start playing with your navel and you notice it feels different than usual. When pressing deep within, it feels surprisingly good as if it is connected directly to your clitiros. You can feel it moving and bulging inside your stomach, being a naughty alien, you can say ;)After some time you eventually will climax, however like the others, the ending is up to youCamille is running slightly late for work and needs a quick shower. She hops in with heavy eyes and messy hair trying to not be anymore late than she already is! She gets her long hair nice and wet then grabs her favorite body wash and starts to lather her arms, chest and belly. She rubs the soap all over her tummy and feels a funny kind of sensation but doesn't think much of it and continues washing her legs. Camille makes her way back up her body really making sure she gets clean and feels the sensation travel from her belly through her whole body! She thinks to herself how good that tingling felt but washes her other leg. Camille gets curious as to what could be causing this feeling and decides to play with her belly and belly button some more! She starts to think that the dreams she was having are affecting her body physically and that her belly button has become more sensitive than her clit! She can't help herself but rub, finger and tap her belly button! He belly starts to move and she rubs and fingers it more and more! Its like the dreams she was having are real! The tingling feeling Camille has feels like a whole body orgasm so she doesn't stop! Camille thinks to herself how good the pressure feels inside her belly button when she reaches up for the shower head changes the setting to high pressure and holds it to her belly button as her belly continues to move in and out like the alien is still inside of her to do this to herself! Her belly is pulsating erratically and with the shower head on high the feeling is so amazing she reaches a climax and her eyes roll back into her head! Her body goes slightly limp and she turns the water off trying to catch her breathe she grabs her towels and starts to dry off but her belly button is still so sensitive to touch that the dry towel almost brings her to her knees! She looks down at her tummy and says whatever it is inside her, wherever planet its from we need more of them here on earth!

OK loser its time to begin paying your loser tax to Me, by paying it shows to Me your My little loser, nothing to Me but a total loser, your nothing to me. Its time to admit to yourself how much of a loser you are and to pay me for the privilege of being My little loser. By buying this video your admitting your my loser and keeping Me in luxury, and it what i deserve. PAY ME NOW!

I've bound the slave to the armchair to make sure he's completely unable to defend himself! Then I start to bite his chest - hard! Again and again I slam my sharp teeth into his skin - then my camera girl hands me a blindfold! After putting the blindfold on the slave I continue to chew up his skin and don't stop until his whole chest is covered in bite marks. In the end I give him a double nipple twist and leave him behind!

Bertie sat on top of the guy. There is a gag in his mouth so that he can't not close his mouth. Bertie smokes, shakes off the ashes in his mouth, spits in the face and mouth of the guy Betty shoots it all, she can't help it and also spits in his face. The girls have fun :)

Candy Blade loves the suffering face of her footslave so much she decided to record her humiliation on camera! In her old sneakers and well worn socks she sits on the table, her slave Clarissa at her feet waiting orders. She must kiss her Mistress' shoes and lick the bottoms. There is no time to hesitate, no chance to escape! She must take off Candy's stinky shoes, hold them up to her own nose while Candy records the whole scene! She has to face the camera no matter her Mistress never stops laughing at her! What a humiliation! But that's just nothing compared to the follow up! Clarissa must deeply inhale those sweaty socks, until that sour stink fills her lugs up completely. Candy even orders her a few times to hold her breath while keeping the stink within, until her lungs burn! There is no relief, just the stink of Candy's socks again! Clarissa must remove them, take them into her mouth facing the camera and has to keep them there while she goes on sniffing Candy's naked feet. To qualify for an Oscar, Clarissa must stick her tongue out, and get ready for all the sweat of Candy's soles!

And wanted to use it as background. But thereâs a place only for one. Itâs Anya A. 4th shooting, and I have no problems with shocking face hit (she already had one). Anya overinflates 16 inch heart and yes, it does not pop â someone (is it Gemar?) did production job well. Girls pose for photo and deflate it.

I am in my mother's house all alone! I have to poop really bad! I know I should go in the toilet like a normal daughter! But I'm not a normal girl at all! I'm a dirty, filthy, scat girl!I run and get a mess pad to poop on and I take it into my Mother's bedroom! I know I have the stinkiest poop and she's going to be home from work really soon! I am sure she's going to smell my stink! What will she think when she sniffs the air and smells the undisguised stench of lingering shit!I pull up my dress and squat right in front of your face! I pull my ass cheeks apart and push out a nice moist load of shit! It curls around and gets my ass so messy! Good think I have wipes to clean my butt! I wipe and wipe but my ass is so dirty! I hope I don't get poop on my Mother's carpet!What a beautiful load I just pushed out! And boy does it stink! The entire room smells like my turds now! I keep sniffing my poop and I even lick the biggest turd a little! Mmm! I have such amazing shit! I hope my Mother enjoys the smell!

The spring is coming. Skinny guy is in the hard adventure with tall beauty Aurora and a new guest girl Spring. Chubby girl with fetish desire. She wants to tries everything, so endurable skinny guy is a perfect target. Stomach jumping.

He woke me up at night abdominal pain. I ate too much for dinner. Belly hurts, I can not make a heap and pee. I?m trying to squat and do shit, standing does not want to get out of ass. I do so shit into the shower. Finally, there is a beautiful golden shit !!!